In the last instalment of his series on trust in pricing, Richard Burcher looks at common things clients do which erodes the trust between them and a law firm. 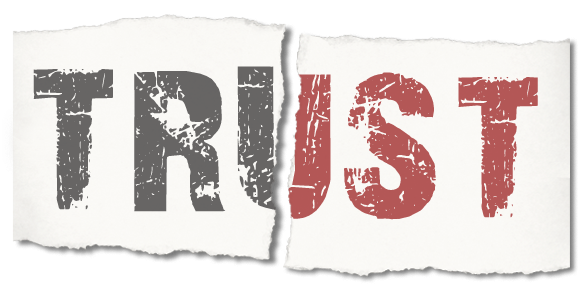 In part one, Richard Burcher suggested that one of the single greatest impediments to the evolution of law firm/client relationships, particularly when it comes to pricing, is the mutual lack of trust. Click here to read the article.

We concluded “… law firms and clients need to do a stock take of what they are doing wrong. In the next two blogs we will share our observations on what firms and their clients are currently doing to damage the relationship and destroy trust. Neither will be spared. There is plenty of criticism to go around!”

In the second part, we took law firms to task for their failings that result in degradation of trust. Click here to read part two. Time now to excoriate the clients…

Inadequate information: it is unreasonable for clients to expect law firms to come up with thoughtful and accurate pricing proposals unless the instructions are accompanied by sufficient information. Many clients think it appropriate to send an email to their lawyers with three lines of instruction/information and expect the firm to come back in short order with a fixed fee that they are prepared to commit to.

Generally speaking, the quality of the law firm’s proposal will be in direct proportion to the quality of the instructions and information. If you don’t know what is required or can’t be bothered assembling your thoughts and the requisite information, don’t expect anything particularly thoughtful or precise in response.

In the more egregious examples we have seen, clients cynically withhold key information they are in possession of and which they know will add to the cost and then attempt to hold the firm to their price when the aggravating features emerge.

Impossible time frames: as with inadequate instructions, it is unreasonable for clients to expect law firms to come up with thoughtful and accurate pricing proposals if you do not allow firms sufficient time to put something together. There are generally four reasons this occurs; the urgency is genuine, the client’s own disorganisation results in an 11th hour request, the client is simply inconsiderate, or more cynically and disingenuously, some clients (quite correctly) assume that by putting the firm under enormous time pressure to produce a price proposal, the proposal will be thrown together, likely to contain omissions and therefore lower than it should be.

In other words, it is a deliberate attempt to wrong-foot the firm. Some clients then go on to further endear themselves to the firm by not only expecting them to produce a thoughtful pricing proposal in a ridiculously short period of time, having received it, they then do nothing with it for weeks.

You are the author of your own cost blowout: many clients fail to appreciate the extent to which they aggravate the cost themselves by constantly changing instructions, pedantically negotiating unimportant minutiae, not providing information and instructions in a timely manner, being dogmatic rather than commercially pragmatic, providing conflicting instructions from different individuals in the same organisation etc.

All legal work can be characterised as projects. Everyone contributing to the project has a role to play and when clients don’t play their part, it is galling to be expected to give a discount in relation to cost blowouts which in some measure arose because of the client’s own conduct.

‘Best and final’ bollocks: we know with absolute certainty that this is almost always just a procurement try-on. It is usually accompanied by reassuring platitudes along the lines of “you are very close to making the cut, but you just need to sharpen your pencil a bit more”. Why play games like this? Just ask firms to put in the best offer they can and be done with it. When you are seen to behave this way, you simply incentivise firms to mitigate your behaviour by holding something back from the first proposal. We’d all prefer to get to the end of the process as quickly as possible without all the interlocutory machinations.

‘And anything else you think we might be interested in’: RFPs frequently stipulate the pricing information to be provided, down to and including a rate card for each level of fee earner. This often concludes with an open-ended request to provide innovative or novel pricing proposals that the firm thinks may be of interest to the client.

Particularly in situations where this is a heavily procurement-driven process, the question is often, though not always, disingenuous, and it is a waste of a firm’s time trying to reply to it. Why? Because we rarely see instances where alternative pricing models are given anything but cursory consideration by procurement. It is not difficult to understand why.

The easiest (only?) way of doing that is a line-by-line comparison of rates and quantifiable value-adds. Alternative fee arrangements (other than fixed fees) are often by definition more nuanced and complex, making comparison between firms very difficult if not impossible. They are therefore of little interest to procurement. So, such requests are frequently a waste of everyone’s time.

Paradoxically, such arrangements tend to be of greater interest to a client’s legal team, but you have to survive running the procurement gauntlet before you can have those conversations.

‘We won’t pay for you to discuss our matters internally’: we have seen this in both RFPs and e-billing audits. The rationale from a client perspective is cost control. But it is frankly absurd and makes about as much sense as a surgical team not having any communication or collaborating prior to surgery or a military commander not discussing matters with their direct reports before going into battle.

The reality is that lawyers need to collaborate internally for a whole range of reasons that are directly relevant to the client’s best interests. This kind of micromanagement edict tells the firm that you don’t trust them to cost effectively manage the project. This distrust may or may not be well-founded but even if it is, this is not the way to address it.

‘We won’t pay for trainees: this is a similar form of cost micromanagement that implies distrust. It is also the wrong question. The question is, ‘are the trainees who are working on the matter doing something worthwhile and adding value?’ If the answer is that they are simply doing things on the file that add little or no value, but they are learning, the client shouldn’t be expected to pay for that.

However, if they are doing something worthwhile that would otherwise have to be done by somebody else, then clients should expect to have to pay for that. Obviously, trainee’s inexperience and inefficiency should be and is usually reflected in much lower hourly rates.

You reap what you sow: trust only develops within the framework of a relationship. No trust, no relationship and vice versa. Implicit in the relationship/trust formula is the notion that it is bilateral. Personal relationships do not flourish unless both invest time and effort in them. Precisely the same applies in business relationships.

And yet, clients sometimes expect law firms to invest heavily in the relationship without reciprocating. Firms are expected to invest nonchargeable time in developing a deep understanding of the client and their operations, the sector in which they operate, the client’s competitors and the personal proclivities of the client’s key personnel.

Clients need to reciprocate in equal measure. It takes two to tango.

Do not use law firms for interest free unsecured credit! If a client has signed up to trade terms with a firm, which it will have without fail, it should comply with them and that means paying invoices on time. Too often, clients regard their law firms as a soft form of credit. They usually take months to start applying pressure to clients and even when they do, they are very reluctant to invoke the penalty interest provisions in the terms of engagement.

Worse are the disproportionately powerful clients who use their commercial clout to demand credit terms of anything up to 6 months. Whilst this is problem is not confined to the legal profession, we see ample evidence of this behaviour detrimentally impacting law firms. It is disgraceful that things have got to a point where in January, the government announced that encouragement has not worked, and it is now having to legally beef up the Prompt Payment Code.

Using eBilling to extend credit: It is accepted that eBilling platforms are a fact of life for law firms as are outside counsel guidelines. But it isn’t remotely appropriate for a few units of unauthorised trainee time or an unpermitted photocopying charge to justify the non-payment of an entire invoice of £50,000 because of the presence of those non-compliant items.

We do not see any evidence of firms deliberately attempting to slip things into their invoices which are not permitted. Almost without exception, the presence of those items is merely a function of the fact that compliance with the requirements is a tortuous, time-consuming and finickity administrative nightmare which they sometimes get wrong.

As a matter of legal principle, when a financial liability is disputed, there is a general requirement that the undisputed portion of the liability is paid. The same should apply to the scenario described above. Even if the client withheld two or three times the disputed amount, it would still be a more proportionate response while matters are resolved.

But no, it is a great way to punish firms that are trying to get it right and gain additional interest-free, unsecured credit.

“Trust is the glue of life. It’s the most essential ingredient in effective communication. It’s the foundational principle that holds all relationships.”– Stephen Covey (The 7 Habits of Highly Effective People)